was founded by polar explorer, environmental leader and public speaker Robert Swan, OBE (Officer of the British Empire), the first person in history to walk to both the North and South Poles. Swan has dedicated his life to the preservation of Antarctica by promoting recycling, renewable energy, and sustainability to combat the effects of climate change.

‘2041’s mission is to inform, engage and inspire the next generation of leaders to take responsibility, be sustainable, and know that now is the time for action in policy development, business generation, and future technologies.

Human activities in Antarctica are governed by an international agreement known as the Antarctic Treaty System, established in 1959. This unique international agreement ensures that Antarctica is used for peaceful purposes only and that the environment is protected. Currently there is a moratorium in place that bans drilling or mining in Antarctica called the Environmental Protocol, established in 1991. This document can be reviewed after the 50-year anniversary in 2041. As the year 2041 quickly approaches, Robert’s goal is to ensure that the young people of today make informed and sustainable decisions for tomorrow.

Culturally, I have witnessed and lived the big Middle Eastern shift in women’s empowerment.

Being a mother of two boys aged 3 and 5, my greatest battle in life is to ensure that their future is safe and sustainable for generations to come. I have now this undisputable, evident need to contribute to the world I live in, to give back to the society I originate from. Being at crossroads of civilisations and cultures, I believe I have the power and possibility to be a part of this change. I travel the world alone with my children and expose them to life’s challenges and the world’s beauty to ensure they embrace this battle from now.

When I first heard Robert Swan’s speech, there was no doubt I was going to embark on the next ‘International Antarctica Expedition’. In a heartbeat, I knew this was “it”, this was the catalyst that would bring all the pieces together and transmit the impulse, network and knowledge to truly make sense by contributing and spreading the ‘2041’ message of hope and change.

There is an undisputable, evident need for people who want to engage and give back. Many initiatives are stemming out from across the Middle East, and as a result the environmental awareness and the need to offset past practices while preparing for a cleaner future is an undeniable reality. On another aspect, the Middle East is on the brink of transformation especially on the women’s front. Women from this region are finally showing that they are also capable of achieving leadership and driving change.

Upon my return, my actions will be geared towards: 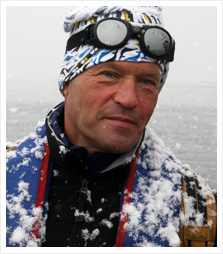 Robert has earned his place in history alongside the great explorers and adventurers who have tested their physical and mental strength to the limit in the planet’s most hostile environments. In 1989 Robert became the first person in history to reach both the South and North Poles on foot.
On both expeditions, he experienced firsthand the effects of environmental damage on the polar ice caps. In Antarctica, his eyes changed color and his skin peeled off his face after walking for weeks under the hole in the ozone layer. In the Arctic, the team almost drowned due to melting ice, caused by global warming. However his message is one of hope.
His unique insights and lessons learned enable him today to educate and stimulate corporate audiences. After 23 years of sustainable leadership and teamwork experience, Robert Swan led the first corporate expedition to Antarctica in 2003.